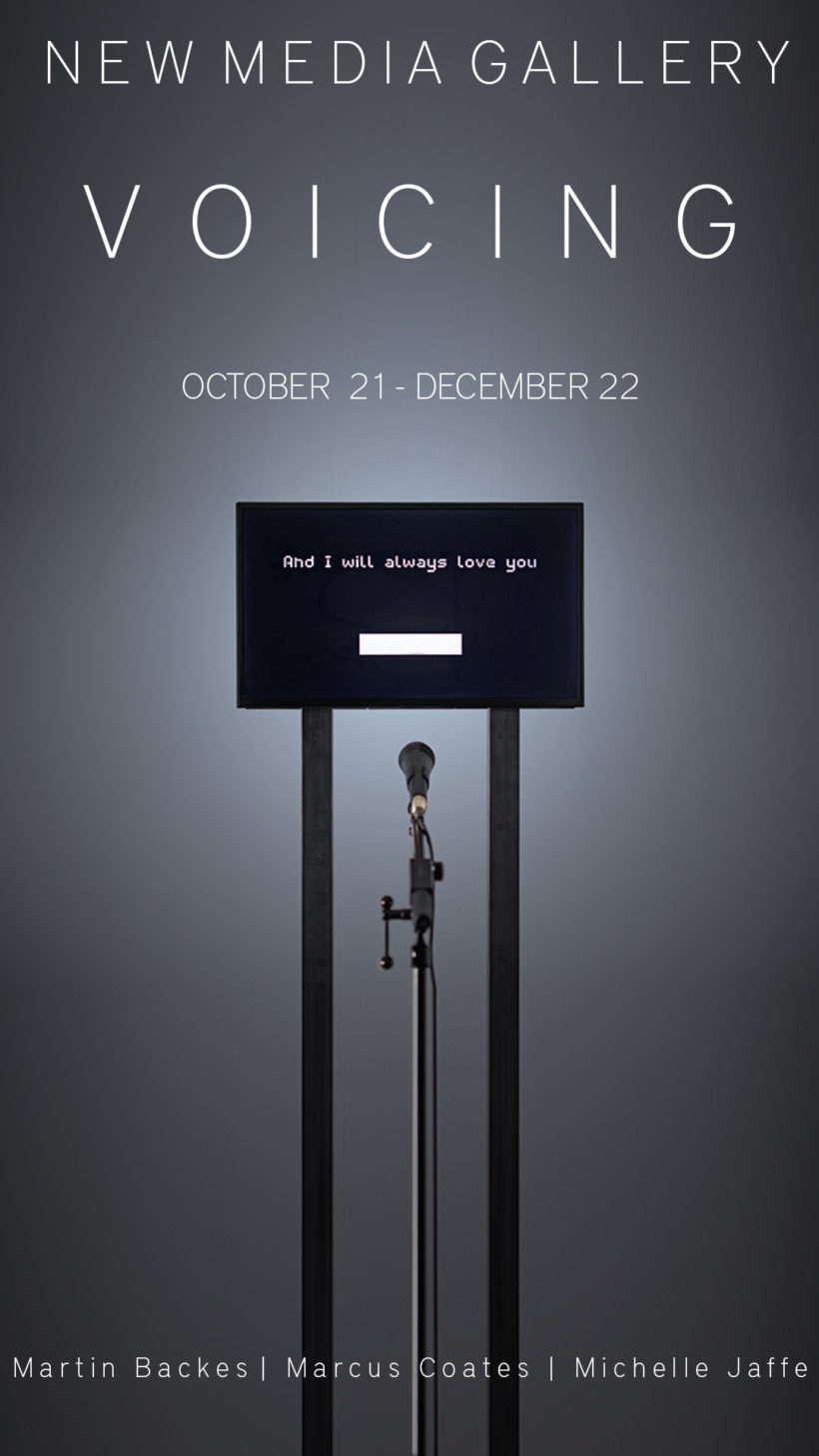 My installation “What do machines sing of?” will be shown at this wonderful place called NEW MEDIA GALLERY. The exhibition takes place 20 October — 22 December in Vancouver, Canada. More information after the click.

Scholars and Scientists have long been captivated by the origins of human speech & language and how we convey emotion through the voice and song. VOICING presents three artists from three countries who explore the evolution, boundaries and emotional territories of the human voice from bird song through to digital code.

Voicing describes the manipulation of notes and chords in any sound-producing entity; human, bird, or instrument, changing the personality of a tone and altering its emotional quality. We control the emotional qualities of our voice in ways we’re not even aware of; modulating expression through minute physiological increments, reappraising our feelings in fractions of a second, redirecting signals in the blink of any eye. Often we do this through song. Although the mechanisms behind the production of vocal emotion are unclear, scientists have observed that when listening to another emotional voice, our own emotional state can radically change. The works in this exhibition affect us through manipulation of the voice through song.

Aristotle noticed the ability of song birds to express emotion through song, and noted the uncanny resemblance of bird song to human language. Two thousand years later Darwin noticed the same thing when he remarked; ‘all the members of the same species utter the same instinctive cries expressive of their emotions’. We now know there is a remarkable level of genetic similarity between vocal learning in humans and song birds. They learn songs by imitating their elders; stuttering and burbling when young… progressing from baby talk to full vocalizations. Like humans learning to speak, song birds learn to sing from their elders. They learn songs better in their youth, and have to practice to get better. They can improvise and string riffs into new songs. Using a remarkable process, Marcus Coates explores the origins of human language through bird song. If human language and emotional voicing has its origins in bird song…how will the voice and song develop now through code?

These days scientists and artists ask ; When robots speak, how human should they sound? The placement and recognition of human qualities like inflection and emotion in speech is known as prosody. Prosody means we have the ability to tell if other humans (or birds, or machines) are communicating with irony, sarcasm, love or anger. Birds appear to have this ability too. And robots can now recognize human emotions from tone of speech…instantaneously and in real-time. Martin Backes and Michelle Jaffé present two captivating works that explore the emotional singing voice using algorithm and a program called Super Collider.

Through multi-screen video, sound, robotics & sculptural electronic media ; and through the expert manipulation of code, sound and language, three award-winning artists explore, in unconventional, funny and poignant ways, the emotional qualities, origins and future of the human song voice in a world mediated by technology. You won’t want to miss this. (Text by NEW MEDIA GALLERY)