New Artwork: I am sitting in a machine; 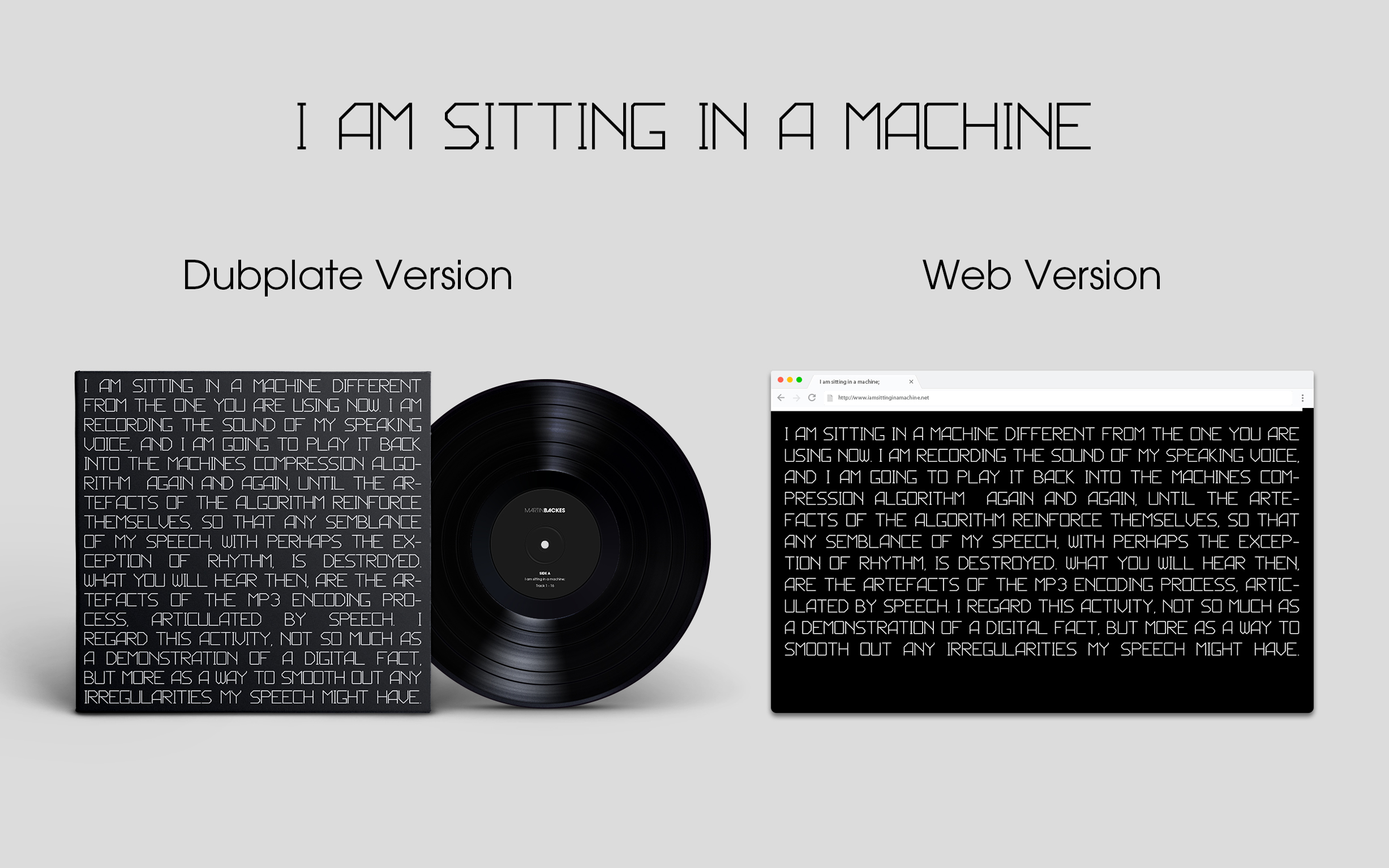 I am really happy to present my new work “I am sitting in a machine;”. The work consists of two parts. One part is a web page application distributed via the Internet. The other part is a limited edition dubplate record consisting of 30 units.

I am sitting in a machine; is an algorithmic work that begins with a recording of an artificial human voice reciting a text which is then run through an MP3 encoder over and over again. With each iteration of the loop, one may hear the artefacts of the encoding process reinforcing themselves and gradually distorting the artificial human voice by revealing its data format.
The work is a hommage to composer Alvin Lucier’s 1969 piece I Am Sitting in a Room. The work consists of two parts. The first part is a limited edition, 30 unit dubplate vinyl. The second is a web page application distributed via the Internet. In both renderings, there are 32 tracks selected from 3000 successive iterations of the 128 kbps 44.1 kHz MP3 encoding. 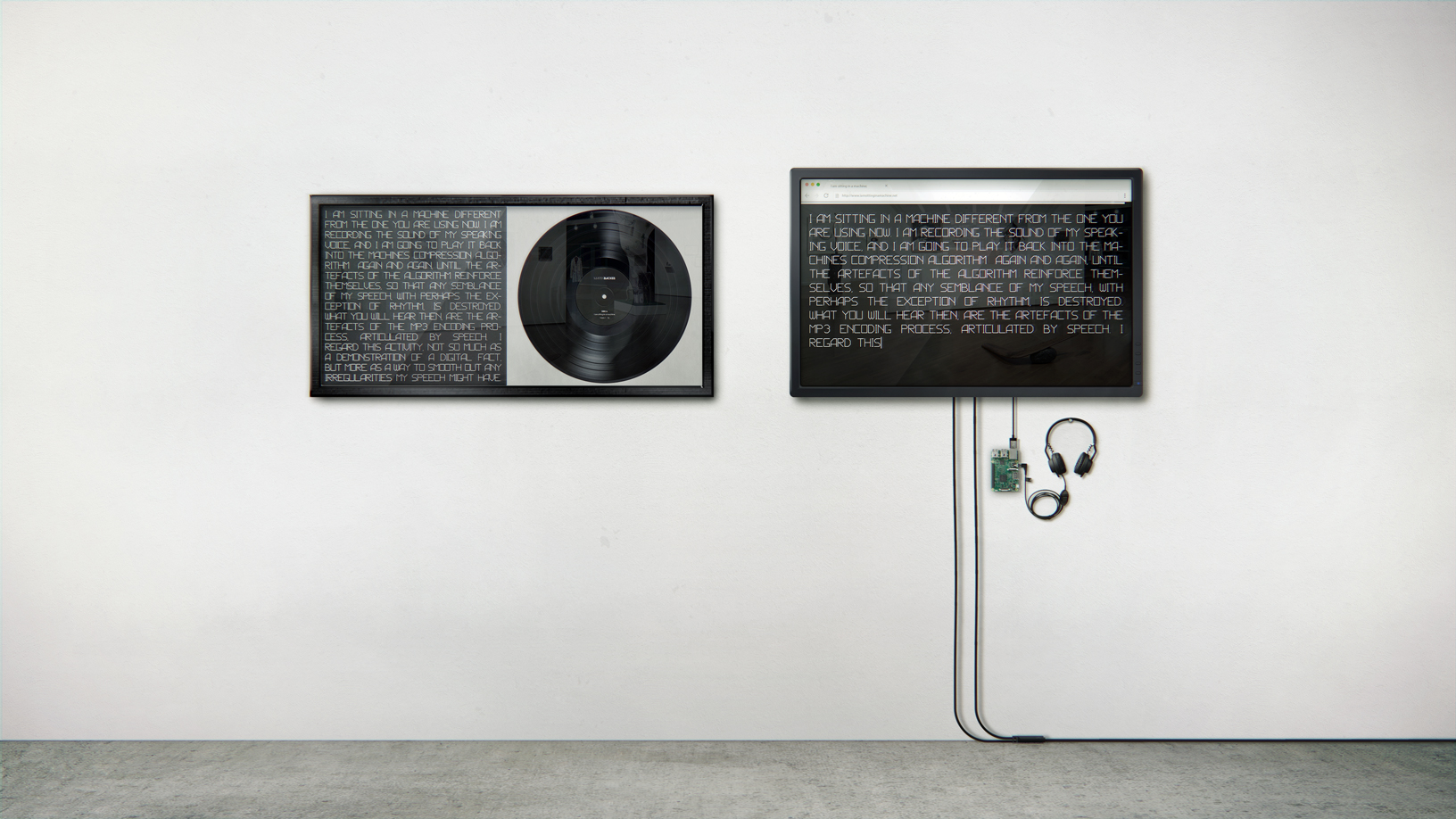 The piece will be exhibited as both, record version (left) and web version (right). Please find more information below. 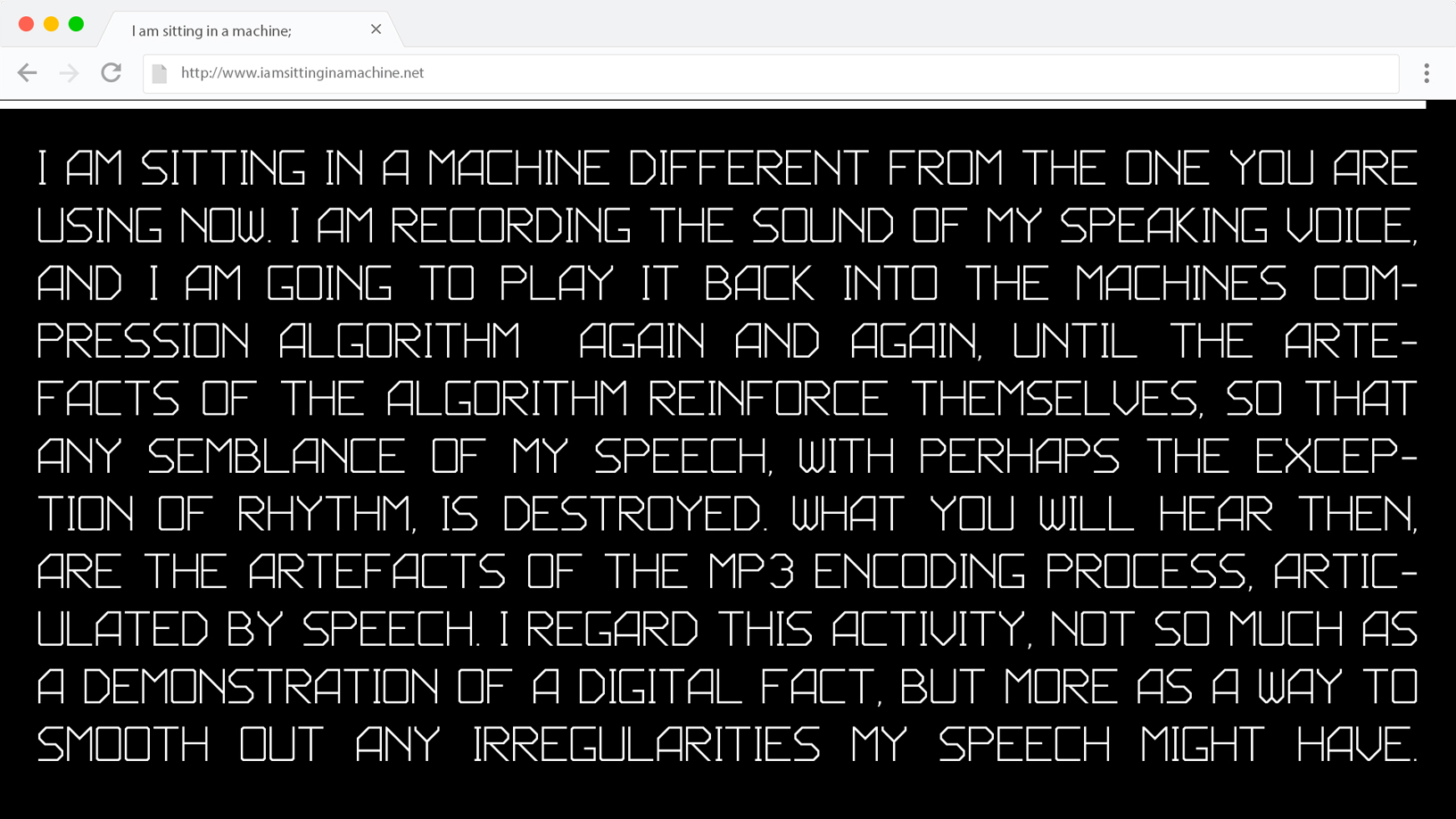 Please note: Mobile browsers are not supported. Please use a desktop web browser (the work is optimized for Firefox and Chrome).

I am sitting in a machine;
For machine voice and computer; (Limited Edition of 30)
2017
Size: 31,5 x 31,5 cm
Material: Dubplate (Acetate)
Record Label: Flipping the Coin Records 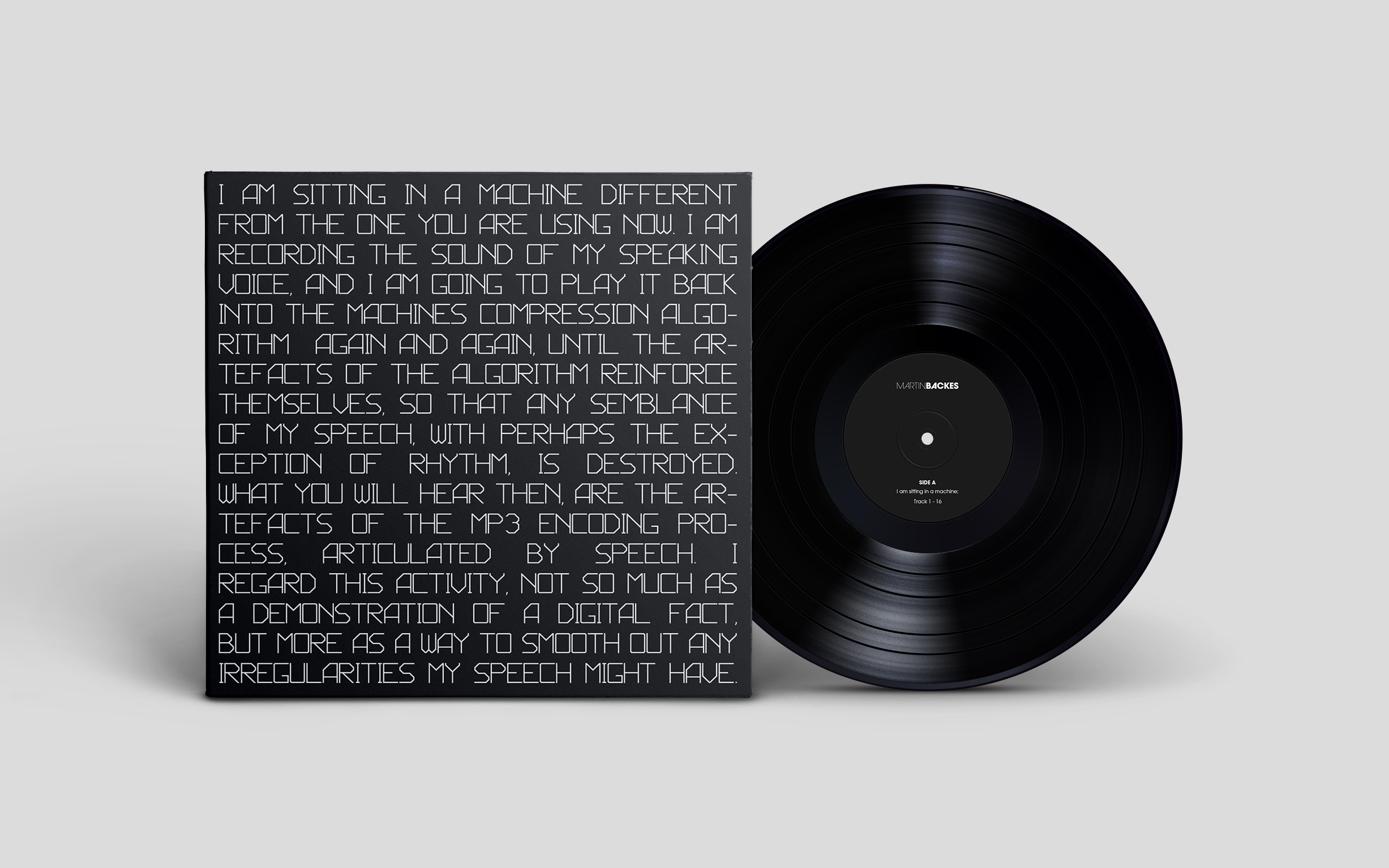 This is a screen-capture of the web application.

I am sitting in a room (1969) is one of composer Alvin Lucier’s best known sound art works.

The piece features Lucier recording himself narrating a text, and then playing the tape recording back into the room, re-recording it. The new recording is then played back and re-recorded, and this process is repeated. Since all rooms have characteristic resonance or formant frequencies (e.g. different between a large hall and a small room), the effect is that certain frequencies are emphasized as they resonate in the room, until eventually the words become unintelligible, replaced by the pure resonant harmonies and tones of the room itself. From Wikipedia, the free encyclopedia

I Am Sitting in a Room original lyrics
I am sitting in a room different from the one you are in now. I am recording the sound of my speaking voice and I am going to play it back into the room again and again until the resonant frequencies of the room reinforce themselves so that any semblance of my speech, with perhaps the exception of rhythm, is destroyed. What you will hear, then, are the natural resonant frequencies of the room articulated by speech. I regard this activity not so much as a demonstration of a physical fact, but more as a way to smooth out any irregularities my speech might have.

Rewritten Version by myself

I am sitting in a machine lyrics
I am sitting in a machine different from the one you are using now. I am recording the sound of my speaking voice and I am going to play it back into the machines compression algorithm again and again until the artefacts of the algorithm reinforce themselves so that any semblance of my speech, with perhaps the exception of rhythm, is destroyed. What you will hear, then, are the artefacts of the MP3 encoding process articulated by speech. I regard this activity not so much as a demonstration of a digital fact, but more as a way to smooth out any irregularities my speech might have

MPEG-1 or MPEG-2 Audio Layer III, more commonly referred to as MP3, is an audio coding format for digital audio which uses a form of lossy data compression, and was first published in 1993. In other words, MP3 is a compression standard based on a perceptual model of human hearing that significantly reduces the size of audio files without noticeably affecting the CD-quality sound. Today, MP3 is probably the single most well known file format and codec on Earth. For sure there is also JPEG, a commonly used method of lossy compression for digital images. So if you would ask to name a universally known file format, it would probably be a toss-up between MP3 and JPG. But lets get back to my work which deals with the MP3 file format and its artefacts.  I became fascinated with noise artefacts that result from accidents in both analogue and digital media, and especially with the MP3 file format more than 10 years ago, and I always wanted to do something with it. Despite not being the first to reinterpret Alvin Lucier’s “I am Sitting in a Room”, and not even the first to do it with audio compression codecs in mind, I wanted to give it a try anyway. In recent years, his work has been subject to many different reinterpretations. Please find a list attached below.
Since the release of Alvin Lucier´s piece in 1969, media and communication technology has advanced and I basically wanted to give the work an update with a dedicated release. The original work explores the physical properties of sound, the resonance of spaces and the transmission of sound through physical media; whereas my work is more about digitized information and its artefacts, hearing science and telecommunications. I wanted to show how digitized information produces unexpected phenomena the same way physical environments do. In the work presented here, techniques are considered and developed, to make the digital artefacts of the encoding process audible, and to reformulate these sounding artefacts as art.

How did I achieve that? First of all, I have rewritten the original lyrics from the perspective of a machine. As a next step, I used the artificial human voice of a text-to-speech function and recorded the text via a script. I then wrote another script and ran the recording into a MP3 encoder automatically, over and over again. By the help of this recursive algorithm, I produced 3000 successive iterations of the 128 kbps 44.1 kHz MP3 encoding. In many cases, it’s hard to hear the difference between those single steps. So like the original recording I decided to select 32 tracks out of 3000 iterations to make the differences more clear. With the final result of 32 selected tracks, I produced two works. I quite liked the idea to produce both: a digital part, which is a web page application distributed via the Internet, and an analog counterpart, where digital information is transferred back to an analog dubplate record and degrades a second time as it`s played.

Each work is signed, numbered and comes with a Certificate of Authenticity.

The vinyl distribution is handled through Flipping the Coin.
If you are interested in purchasing either the dubplate record or the web page application itself, please get in touch with me ( shop [at] martinbackes dot com ) or directly with Flipping the Coin. The vinyl version is strictly limited to 30 units. You will receive a reply with all needed information to place an order.

About Flipping the Coin Records

Below you will find a list of different reinterpretations of the original work.

“I am sitting in a video room” is a homage, which explores the ‘photocopy effect’ by Canzona

“I Am Sitting in A Room” by Collage artist Residuum

“I am Sitting in a Room, Compressing” by Jonathan Sterne

“I am sitting in an.mp3” by Motoki Ohkubo

…and probably more!? Please let me know if i missed someone out, thanks.