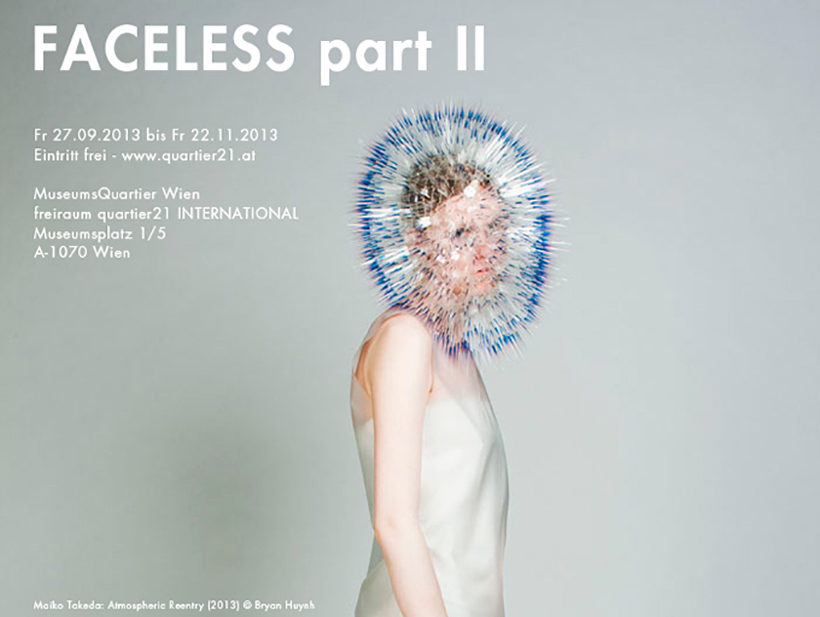 My work Pixelhead will be shown at the FACELESS exhibition at MuseumsQuartier / quartier21 in Austria, Vienna.

Please note that the exhibition is split into two parts. FACELESS Part 1 runs from July 4 to September 1 2013. Part 2 opens on the 27th of September. My work will be shown in the second part of the exhibition.

FACELESS – Facelessness at the MuseumsQuartier Wien

“FACELESS part I” showed the appeal that hiding, veiling, or masking the face exerted on art and fashion after 9/11. The second part of the exhibition, opening on September 27 at 19:00 in freiraum quartier21 INTERNATIONAL at the MuseumsQuartier Wien, continues the survey in a more participatory approach. The focus is on interdisciplinary works and lectures, performances, and workshops that convey how we can survive without losing face and at the same time revolt.

“As much as a face and an expression can give away about us, we have plenty of creative potentials at our disposal for making these tale-telling surfaces illegible, even invisible, without running the risk of suffering social death,” says Brigitte Felderer, co-curator with artist Bogomir Doringer of the group exhibition “FACELESS part II.”

“The first part of the exhibition attracted 12,000 visitors. Its success demonstrates how relevant the theme is and how much people are interested in it. ‘FACELESS part II’ resumes the critical exploration of problems of our media culture,” says MuseumsQuartier Director Dr. Christian Strasser.

The works by 45 artists are divided into themes like digital masks, mirrors, icons, and invisible people. As for part one of the show, the exhibition design was created by students from the Department for Stage and Costume Design, Film, and Exhibition Architecture at Mozarteum University in Salzburg. “FACELESS part II” will additionally feature photos on the theme of facelessness contributed by more than 50 artists to the website www.facelessexhibition.com (totally about 2.000 posts). All names of artists will be announced online.

The poignant, poetic sound of William Basinski’s video work “Disintegration Loop 1.1.,” audible throughout the exhibition space, immerses visitors in a melancholic atmosphere. The film by the American composer was shot on the evening of September 11, 2001, and in a single, more than 60-minute take shows the disintegrating Twin Towers enshrouded in wafts of smoke.

Jill Magid’s installation “Article 12/The Spy Project” was produced for the Dutch Secret Service. In this assignment, she portrayed the spies to give the organization a “human face.” Although she always protected their identity, some parts of her work were later censured and confiscated. The central element of her text-based installation is “I Can Burn Your Face,” a neon piece shining so brightly that it is virtually impossible to decipher the confidential information with the naked eye.

Andrew Norman Wilson uncovers the fact that the world’s largest search engine also employs fourth class workers. The film “Workers Leaving the Googleplex” is about so-called ScanOps, low-paid temps who unbeknown to the public scan books for Google’s digital library. The “ScanOps” photos also show how some of the book pages are misscanned and include unwanted elements. British artist Lucy Wood’s installation “Distant Neighbors/Vecinos Distantes” is themed around the invisible migrants who illegally cross the border between the USA and Mexico. “Exactitudes”, Ari Versluis’ and Ellie Uyttenbroek’s multi-year photography project on identity and uniformity shows how individuals from various social groups resemble each other in terms of attitude and dress code.

American artist Adam Harvey creates wearable privacy in collaboration with fashion designer Johanna Bloomfield. Their “Stealth Wear” features intelligent camouflage clothing and accessories that protect the wearer from surveillance. As its second station after the New Museum in New York, the Privacy Gift Shop is making an exclusive appearance at the exhibition. Items on sale include the anti-drone collection made of metalized textiles that cannot be detected by infrared cameras. Zach Blas, founder of the artist collective Queer Technologies, develops forms of protest involving the distortion of biometric data. His project “Facial Weaponization Suite” reveals how we can evade face recognition, deliver false data, or wear the “face of many.” “As the face becomes a site of ever increasing control and governance, new ethical relations to the face are emerging that embrace defacement and escape, not necessarily mutual recognition but collective transformation that is both anarchic and commonizing. Today, the mask is the most popular implementation of defacement, a celebration of refusal and transformation,” says Zach Blas.

Like Addie Wagenknecht and KATSU, German conceptual artist Aram Bartholl is part of the New York artist collective F.A.T. – Free Art and Technology Lab. In “How to Vacuum Form” he shows how you can make your own Guy Fawkes mask, the accessory of protest. In his videos and performances, Jeremy Bailey skillfully plays a nerd. The Canadian artist is represented in the exhibition and the side program, among other things giving a workshop for teenagers called “Hey You with the Totally Awesome Face” to teach them how to trick webcams and look more popular. Dutch artist Arthur Elsenaar makes the face dance. His research project “Artifacial” makes it possible to digitally control movements of the face muscles with electrical impulses.

In the video “The Punishment” by Ondrej Brody and Kristofer Paetau, children exercise the seemingly natural urge to punish evil with relish – in this case a photograph of George Bush. By melting away, the faces in Ben DeHaan’s digital portraits demonstrate the fragility and short life of digital formats. Japanese hatmaker Maiko Takeda creates masks and headdresses that seem to come from a virtual world. Björk has been wearing them at concerts for several months now. German artist Martin Backes adapts the pixel filter of Google Street View that makes faces unrecognizable and reproduces it on the fabric of his Pixelhead masks. On the search for the right/perfect face through plastic surgery, artist and filmmaker Martin C de Waal tests the boundaries of his personality. “Narciss,” Mirko Lazović’s sculpture made of mirrors, makes it impossible to see your own reflection. Bryan Lewis Saunders is an American artist with many faces. For many years, he has been drawing a self-portraits every day. “FACELESS part II” shows his 48-part series “Under the Influence,” created under the influence of a daily changing assortment of drugs and substances.

“FACELESS part II” has been has been organized in cooperation with the Federal Ministry for European and International Affairs, Artistic Technology Research (University of Applied Arts Vienna), and Mozarteum University in Salzburg with the support of partners and sponsors from Austria and abroad. A side program will feature a symposium as well as guided tours, performances, lectures, and workshops, including during the VIENNAFAIR and VIENNA ART WEEK.

Please find the press text above also by clicking this link.